Organic Honeybush (Cyclopia) from the Cederberg District (the Eastern Cape) of South Africa.

Honeybush possesses many great health benefits, along with a pleasing taste to match. The sweet flavor with overtones of honey is enjoyed by many tea drinkers either by itself, or with the addition of a little honey to the cup. Either way, you will enjoy a caffeine-free drink, which is high in antioxidants as well as Pinitol.

There are traces of this honeybush being brewed as a tea since the mid-1600's. Around that time, the Dutch East India Company began a spice and tea trading settlement on the land that is now Cape Town, South Africa. While they were recording the great bounty of flora that grew naturally in the area, the Honeybush was one of the plants that they took note of specifically. The San and Khoi-Khoi - local African tribes, were using it as a tea. The new inhabitants quickly began brewing this tea for themselves, harvesting ample leaves from bushes all around the area.

Despite having such a rich and lengthy history as a brewed tea, Honeybush has only recently hit the mainstream. The majority of organic Honeybush that is available on the market is still obtained from wild forms of the plant. With a quick look at the size of the annual Honeybush harvest, it is easy to see how fast this tea is gaining in popularity. Back in 1997, there was approximately 30 tons of Honeybush collected and processed. Fast-forward to 2004, and the amount had been nearly multiplied by 10 - with almost 300 tons of Honeybush collected.

The production and manufacturing process used for Honeybush doesn't vary significantly from that of regular black tea. The process takes on four specific steps: harvesting, cutting, fermentation, and drying. To start, a supply of clippings is brought into a factory where they are cut down to a smaller size, which will help speed the fermentation process later on. These clippings are formed into large piles and covered with canvas in order to ferment. The fermentation period lasts on average around 3 days. It is during this time that the sweet notes that will be tasted in the tea later on begin to develop. When fermentation is complete, the tea is spread out on top of the canvas so that it can dry for a couple days.

Honeybush can be enjoyed as a hot tea or an iced tea depending on your tastes and preferences. A great hot cup of Honeybush tea can be created with 1 teaspoon of tea in a teapot along with around 8 ounces of boiling water. Once the covered teapot is allowed to steep for 10 minutes or so, the tea will be ready. For the iced version, simply allow the tea to cool and serve over ice. 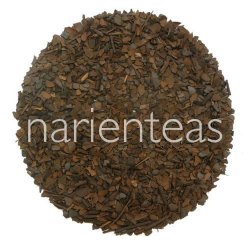 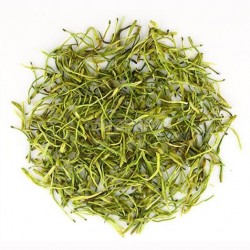