Rooibos is a caffeine-free herbal tea from the Cederberg District (the Eastern Cape) of South Africa. 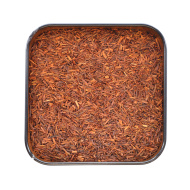 Like many of the teas that come from the beautiful South African region, Rooibos was first discovered and put to use by the Khoi Khoi tribe. Rooibos grows naturally in the Cedarberg region as a plant that produces fine needle-like leaves. Those original harvesters chopped up the leaves with axes and bruised them before they were left in the sun to ferment for a period of time. While modern production methods are more advanced than a simple ax and manpower, the general idea has not changed since those early days. Many of the benefits that the Khoi Khoi felt they received from drinking the tea created by the Rooibos plant are the same advantages that modern drinkers appreciate like soothing headaches, helping digestive problems and more.

As mentioned above, the general idea behind preparing Rooibos for use as a tea hasn't changed for a very long time. Modern Rooibos plants are planted in the February - March timeframe and are tended to for a year and a half before harvest. Once the plant is cut, it is processed into a consistent size and run between rollers to bruise the leaves and get the fermentation process started. After left to ferment, the sweet aroma and flavor that so many Rooibos drinkers enjoy will start to appear.

As many tea drinkers choose various teas for their nutritious benefits, it is no wonder why Rooibos is so popular. There are a great number of nutrients within brewed Rooibos tea such as potassium, calcium, copper, zinc, magnesium, manganese, sodium, and more. Some of the potential benefits from drinking Rooibos include assisting in some metabolic processes and functions, helping to build strong teeth and bones, and improving oxygen transport in the blood. There are also a number of antioxidants that can be extracted from the tea, and the benefit to be found from these antioxidants is only increased the longer the tea is allowed to brew.

For a delicious cup of hot Rooibos tea, bring water to a boil and add a large teaspoon of loose Rooibos to the teapot. Top the tea with about 8 ounces of the hot water and cover the pot for between 3-7 minutes. Once the tea has been allowed to steep, add sugar and/or milk to taste and enjoy. If you would prefer a glass of iced tea, allow the brewed tea to cool and then pour over ice. Since the ice will slowly melt and dilute the tea, it is a good idea to brew a stronger pot of Rooibos for this application. Add some sugar or lemon based on your preferences.