White teas are uncured and unfermented young tea leaves and buds. They are usually dried quickly to prevent oxidation. 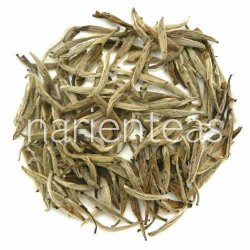 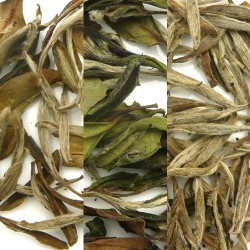 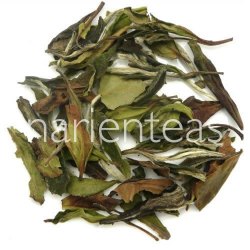 This is as close to the tea from the legend of Shen Nung that you will find. It is said that in 2737 BC, a tea leaf drifted from a tea tree into his cup of hot water. White tea is that same simple leaf, dried. White tea brings you back to the dawn of tea.

White tea flavors tend to be light and gentle. White teas have been described to have flavors and aromas that include honeysuckle, maple, orange, lemon, or floral like jasmine and rose. Because the "new style" leaf white teas have a bit more oxidation than bud-style, their flavor profile may lean more towards that of an oolong or even a black.

For many white tea harvests, only the buds are harvested. For the "new style" whites, buds and the first one or two leaves are plucked.

There are three primary forms of white tea:

Like Gyokuro green teas, plants intended for white tea processing are shaded for the last 3 weeks before the harvest.

White teas are often dried in the shade with no additional heat provided. Other times they are dried in the sun or in a temperature-controlled room. The pale green buds turn to a silvery color as they dry. Because there is no heat applied to destroy the enzymes, some oxidation does occur during the drying process, particularly in the "new style" white teas that include opened leaves. Sometimes white teas are shaped, but most are not.

White tea, by virtue of its size, can be hard to measure accurately for brewing with spoon measurements. It is more accurate to use weight. Use 2-3 grams (approximately 2 tbs) of white tea per 6 ounces of water at 160-175 degrees Fahrenheit for 3-4 minutes.

The buds of the tea plants are thought to contain the highest concentration of caffeine in order to protect them from being consumed by predators. Since the tea is simply dried, white tea, particularly bud-style white tea, has a high caffeine content relative to other teas. However, the fact that white tea is steeped at a lower temperature than many other teas lowers the amount of caffeine that is actually released into the cup. The overall effect is a cup that has less caffeine than black tea and a more similar amount of caffeine to green tea.