White Peony "Bai Mu Dan" is an exceptional white tea grown, harvested and processed in the Fujian region of China.

Refreshing and faintly reminiscent of fresh apples with a lovely, lingering flavor.

Although it is darker in flavor than Silver Needle, it offers the remarkable flavor nuances and the delicate floral aromas that set white tea apart from other tea types.

Legend has it that White Peony was a gift from a deity to a mortal in order to cure illness. There are many variations on this myth - the deity may be male or female and the person who is miraculously cured may be an old woman or a child - but the story typically takes place in the mountains. In reality, the specific processing methods used to make White Peony were developed during the last century in the mountains of Fuding County, Fujian, China.

Like all the best white teas, our White Peony is grown, harvested and processed in the Fujian region of China. Sets of two leaves and one bud are meticulously harvested by hand from Narcissus tea bushes (a tea varietal known for making superb white teas) in Fuding County. Immediately after they are harvested, they are gently transported indoors and allowed to wither in the shade on bamboo racks for about 40 hours, depending on the ambient temperature and humidity. During withering, natural chemical reactions (including light oxidation) cause White Peony's aromas and flavors deepen. Once the tea master judges that the leaves have been sufficiently withered, the leaves are partially dried, allowed to cool completely, and then dried further. When done by a skilled tea master, this process locks in the wonderfully complex flavors of a choice White Peony.

Appreciation of this connoisseur tea begins with the leaves themselves. Perhaps more than any other type of tea, White Peony looks like the plant from which it was harvested. A close examination of the dry leaf reveals a remarkable range of color and shape, from shimmering, spindly, down-covered buds to leaves that are near black with flecks of muted green. Much like their brewed form, the dry leaves smell full, woodsy and toasty.

The next step to appreciating White Peony is its brewing process. Since White Peony's leaves are sprawling and voluminous, it takes about two heaping teaspoons of leaves per cup of water to brew a full-flavored cup of tea. Water that is steaming (not boiling) is best for extracting the nuanced flavor of this rare tea. Brew for three to four minutes as you watch the leaves unfurl into large, flat expanses of green. When you remove the wet leaves, note the woodsy aroma with sweet undertones of dried apricots and dried flowers.

A single sip of White Peony's deep, flaxen-gold brew illustrates why it was named for the Chinese symbol of riches and honor. Its aroma is reminiscent of European sipping chocolate. Notes of sliced ripe apricots drizzled with cream, fresh cut flowers and berry brambles in summer further enhance the aroma. The flavor holds deep notes of dark cocoa, orange peel tannins and acidity, fresh flowers and bamboo forest growth. Its chocolate and fruit notes are reminiscent of a fine Keemun black tea. A lingering aftertaste of cocoa and walnut shells makes White Peony a fantastic tea for enjoying with sweets.

Try pairing it with honey cake or Greek pastries. The second infusion is nuttier than the first, so it's also delicious alongside plain yogurt topped with cashews, walnuts, almonds and dark honey. 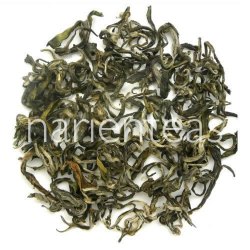 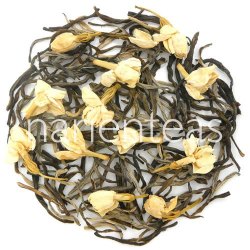 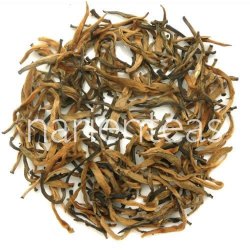