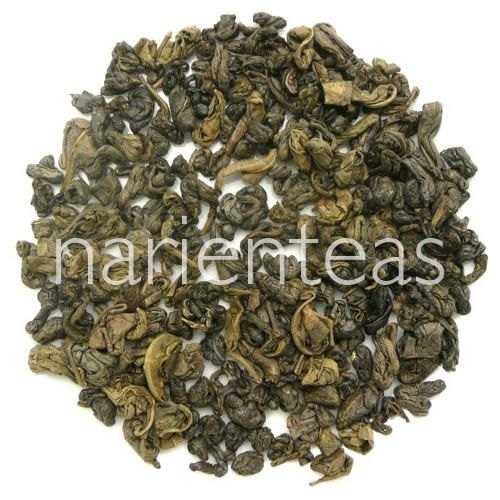 Gunpowder tea or "Zhu Cha" grown in the Zhejiang province of China, is one of China's most famous green teas.

Our Gunpowder green tea is grown in the Zhejiang province of China. It is harvested several times throughout the year and then rolled into tight pellets. Since the Tang Dynasty, this rolling technique has been used to help keep green teas fresh during long trade routes. It seems it was a success - at one point in the 1800s, Gunpowder green tea accounted for nearly two-thirds of the tea imported to the United States, and Gunpowder green tea remains a staple in Morocco. 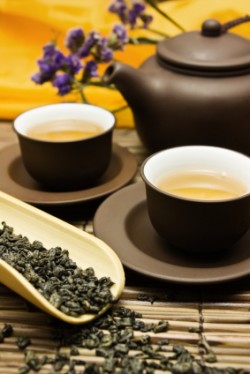 There is much debate over the origin of Gunpowder's name. Some say it is from the tea's nugget-like shape and grayish color, which are reminiscent of gunpowder pellets that "explode" into full leaves when brewed. Others say it comes from confusion over the Chinese phrase "gang pao de" or "freshly brewed tea." And still others say it comes from a non-existent smoky flavor or crackling sound during brewing. Of course, when it comes to our Gunpowder green tea, we'd rather enjoy its flavor than argue about its name's origin.

Gunpowder green tea can be used more slowly than most green teas while still retaining its distinctive flavor and aroma.

The coiled, shiny, army-green and charcoal-gray leaves of Gunpowder green have a nutty, toasted, seaweed-like aroma. As they brew and open, they yield aromas of iodine, wet fallen leaves, boiled dinosaur kale, dry tobacco and spearmint. The dense leaves unfurl more with each successive infusion, but retain their dark green color and rich green aroma. They produce a clear, butter-hued brew with clean scents of pine, tobacco and mint. Its flavor is remarkably refreshing.

In Morocco, tea is largely a social occasion. Tea glasses are often painted with ornate patterns in bright or metallic hues and tea trays may be made of silver or other decorative metals. Men in Morocco take great pride in preparing and serving tea. Particular attention is paid to the pouring of the tea. It is poured from great heights as a demonstration of skill and as a method of cooling and aerating the tea. Gunpowder fanatics can practice this technique at home for an unforgettably flavorful, frothy cup of tea.

If you want to brew Gunpowder green tea the traditional Moroccan way, simmer one tablespoon of leaves with a large handful of fresh mint leaves and two cups freshly boiled water for five minutes, or until it has a strong, minty aroma. Remove it from heat, allow it to steep for two more minutes, and then strain the brew into a serving vessel, such as a pitcher or decorative teapot. Add plenty of sugar - about 1/4 cup is the norm - and stir well. Place heat-resistant glasses on a tray. Pour the tea from the teapot into the glasses. Serve immediately, while the tea is still frothy.

For a simpler cup of tea, brew Gunpowder with steaming water. Use one heaping teaspoon per cup water. Infuse for one to two minutes. Reinfuse as desired. Later infusions of Gunpowder are fuller, greener, deeper and more honeyed than the first.

In the heat of summertime, brew Gunpowder green tea double strength. Stir in muddled mint, dark honey or rock sugar and pour the mixture over ice. It can also be enhanced by a squeeze of lemon for a flavor akin to Southern iced tea. 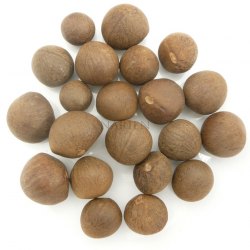 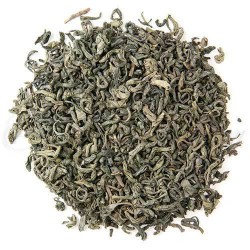